The Future of Mass Spectrometry

Mass spectrometry is the workhorse of analytical chemistry. It performs the analysis of the sample, making mass spec equipment an essential part of the analytical instrumentation market. A recent shift in the laboratory landscape, though, is forcing a change in the size and functionality of mass spec equipment. Laboratories are requiring shorter testing times with faster throughput in a smaller footprint, and these new demands are driving the market to develop smaller, higher performance systems.

Traditionally, mass spec systems have been used for routine testing in biotechnology, pharmaceuticals, food safety, petrochemicals, and environmental analysis. Mass spec equipment, which usually consists of a large box with a footprint that can easily take up a 6-ft laboratory benchtop, typically performs one task slowly with a retention time ranging from five minutes to 10 hours, depending on the type of test and molecules analyzed.

The mass spec market is an intensely competitive climate, and companies are looking to distinguish their product offerings with features that not only enhance the performance of routine functions such as clinical diagnostic testing, but that will also facilitate more demanding processes, such as analysis of biomarkers and biologic drugs. 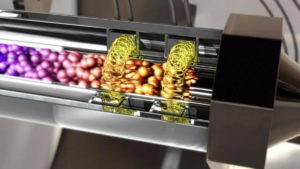 Standard mass spec equipment has been tasked to perform routine procedures that identify and quantify metabolites for applications such as drug discovery in pharmaceuticals. To address the trend toward more complex testing, mass spec OEMs must either develop new machines that perform more complex analyses, or they must modify existing equipment to work with different applications. One way to do this is to expand the capabilities of these machines, using the equipment’s core technology and adapting it to address a new market such as the complex research technology sector, the regulated clinical market, or the agriculture industry. For example, the AB Sciex matrix-assisted laser desorption time-of-flight (MALDI-TOF) mass spec, which is typically used in identifying a pathogen and functions as an antibiotic sensitivity machine, has been repurposed for use in clinical microbiology applications for molecular fingerprinting. Such repurposing of equipment for use in other applications has further intensified the competitive climate.A cutting-edge example that illustrates the future of faster results is an experimental surgical knife called the iKnife, which identifies cancerous tissues “on the fly.” The electrosurgical knife produces a vapor containing ionized molecules, and the vapor is sent to a mass spectrometer. By producing a real-time (1–3 seconds) analysis of the tissue sample in the operating room, the surgeon can get an immediate result and make an informed decision during the procedure.1 Although this device is not being developed by one of the large players, such advancements will certainly have an impact on the size and performance of future equipment. 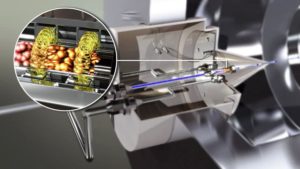 Laboratories have been faced with increasingly limited space as they address new regulations governing the height and width restrictions on certain laboratory equipment. A common laboratory module is approximately 10 ft. 6 in. wide, but will vary in depth from 20–30 ft.2 To squeeze more equipment into these tight spaces, laboratory managers are seeking smaller equipment that can perform as well or better than standard mass spec equipment. To meet the demand, OEMs are responding with equipment that produces a higher throughput, faster scan speed, wider dynamic range, more sensitivity and higher resolution—all in less space. While this new equipment often carries a higher price tag, the higher-end mass spec equipment performs additional functions, resulting in a faster throughput with a smaller footprint, and ultimately results in cost savings.

In the last four years or so, new mass spec products have addressed the full scope of user requirements through an elevated level of functionality by offering a wide range of product configurations as well. For example, the Bruker vertically integrated MALDI Biotyper uses mass spectrometry to measure a unique molecular fingerprint of an organism. The compact unit is a benchtop system that has integrated all of the same technology as its larger counterparts. Thermo Scientific’s Orbitrap MS family is another example where the company is leveraging its advanced technology in a smaller footprint. Its benchtop Q Exactive Focus mass spectrometer combines quadrupole precursor selection with high-resolution, accurate-mass detection. The unit simplifies method development but produces sensitivity comparable to triple quadrupole mass spectrometers.

From the Inside Out

All of these requirements mean that the internal components of the mass spec equipment must be smaller and must be tightly packed in to save space. Building smaller mass spec equipment is often determined by the size limitations of the internal components. When OEMs can reduce the size of the internal components, they can reduce overall equipment size. A key location for space savings is near the spray nozzle where once the sample is introduced from the separations device, the sample is ionized. When the sample is introduced, it is ionized through electrospray ionization (ESI), and the molecules are charged. Before the difference in the molecules’ mass-to-charge ratio (m/z) is measured for quantification, the ions typically pass through a capillary tube to keep the sample ionized. Reducing the size of components, including the capillary tubes and caps, equates to not only smaller package sizes but also interchangeability.

Manufacturers have reduced the sizes of these glass capillary tubes to accommodate smaller equipment. These tubes, which use a capillary cap to transfer voltage and keeps the sample ionized, require connections such as metallic mesh or a tiny canted coil spring to prevent the capillary cap from sliding off. If the capillary caps become loose, the sample does not remain ionized, and the mass spec is unable to determine the mass-to-charge ratio. 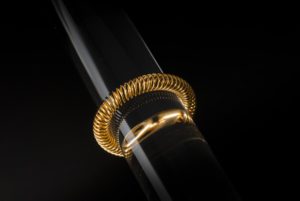 Metallic mesh or canted coil springs are used to secure the cap onto the capillary during ionization. Compared with older metal caps, for example, mesh caps require only occasional replacement (once every two months to once every year) because of chemical buildup, making them an attractive option.3 However, small solutions with maximum contact that ensure excellent current-carrying capabilities and continued ionization after the electrospray offer additional benefits. A tiny gold-plated spring, for example, prevents electromagnetic interference, allows the sample to remain ionized, and ensures that the mass spec will detect the ions by accelerating them and subjecting them to an electric or magnetic field. It is imperative to ensure that ions remain charged and environmental factors do not affect the sample or cause a contamination.

Faced with limited space, stretched budgets, and minimal time, laboratories are demanding a new era of mass spec equipment that provides higher throughputs, shorter testing times, and smaller footprints. Mass spec equipment is no longer destined to be a big box, limited to routine analysis. As mass spec OEMs seek to distinguish their products in performance and size, they will be considering different component technologies—such as canted coil springs—as a means to reduce the size of their equipment. They will also expect the next generation of mass spec equipment to perform more demanding applications in more markets than ever before.

Sarah Smith is the global market manager, analytical, for Bal Seal Engineering Inc. Smith, a degreed mechanical engineer, has held several technical and sales positions at Bal Seal over the past seven years. As the global market manager for the analytical market, she serves a customer base that spans from the U.S. to Asia, working with design engineers and the Bal Seal sales force to help OEMs create next-generation analytical equipment that provides better sample resolution and faster turnaround.