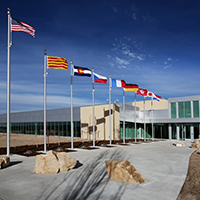 Colorado Springs, Colo. – August 30, 2012 – Less than two months after a groundbreaking ceremony held to mark the beginning of its construction, and an estimated 30-60 days before any real building will begin, a new facility planned by Bal Seal Engineering and Colorado architects CSNA has received a citation for design excellence from the American Institute of Architects Colorado South Chapter (AIA Colorado South).

In a news release earlier this week, AIA Colorado South named the project – which will put a new 155,000 square-foot manufacturing facility at 1350 Belpratt View in Colorado Springs – as its Citation Award winner in the “un-built architecture” category.  A certificate commemorating the award was presented to representatives from CSNA and Bal Seal on August 24th.

According to Alaina Gonzales, Membership and Communication Manager for AIA Colorado, Bal Seal’s design was selected from 12 entries, and was one of only five given out this year in all categories. “The unbuilt category isn’t frequently awarded – no awards were given in this category in 2011,” Gonzales says. “This project caught the attention of the judges.”

Gregory Friesen, principal architect for the Bal Seal facility project, says he believes the award is the “best possible outcome,” because it considers design apart from construction, in the same way that a musical score might be considered separate from its performance.

“The German philosopher Goethe described architecture as ‘frozen music,’” Friesen explains. “It’s a great analogy, and I think it illustrates perfectly why a citation is the ideal category for an un-built work. It acknowledges that, due to many factors, the final construction may not always convey the original design ideal.”

Jon Stillman, who has managed the construction project under Pauling Properties, Inc. since planning first began in 2011, says he is committed to sticking with CSNA’s award-winning plans. He adds that the new facility will incorporate state-of-the art energy-saving features, as well as indoor and outdoor common areas that foster a “family-friendly environment.”

Bal Seal, a worldwide leader in the production of custom-engineered sealing, connecting, conducting and EMI shielding components for critical defense, automotive and medical equipment, announced its plans to build what it calls an “expansion facility” at the Colorado Springs location in December of 2011. The company held an official groundbreaking ceremony on June 14th 2012, and workers with large earth-moving machines began preparing the 18-acre plot for construction shortly after that.

Once complete, the $45M facility will house high-tech manufacturing equipment that the company uses to make Bal Seal® Spring-energized Seals, Bal Seal Canted Coil Springs® and connector systems. Stillman estimates that the construction will result in the creation of about 200 jobs.

Both Friesen and Stillman say they’re “very proud” of the Bal Seal facility, and add that they’ll be aiming for more awards in the future. In 2014 they plan to submit an AIA entry for the completed project, and they hope to explore technical achievement, construction innovation and excellence, community design and trade association accolades as well.