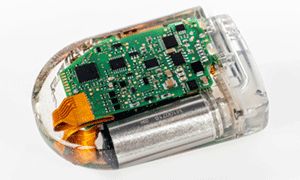 Seal Improves Life of Implantable Pump, and of Patient

The design of an implantable low-flow pump to treat ascites required an added level of protection against malfunction caused by the potential ingress of moisture, fibrins, large proteins, blood clots, and other organic materials.

When engineers at a Swiss medical device company began designing an implantable low-flow pump to treat  the condition known as ascites, or peritoneal cavity fluid, they knew they were on the verge of a therapeutic breakthrough. But protecting their pump’s inner workings from exposure to bodily fluids proved to be a big challenge prior to testing and launch. 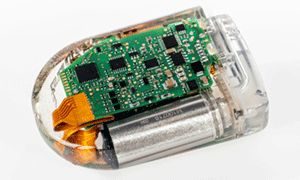 Refractory ascites, which describes an accumulation of pale yellow or clear “serous” fluid in the peritoneal cavity below the chest and diaphragm that does not respond to medical treatment, affects an  estimated 100,000 people in the  US  and Europe. The condition can be caused by liver disease, congestive heart failure, kidney failure, and certain types of cancers, and is often accompanied by a significant increase in abdominal girth. In the past, ascites treatment consisted of frequent paracentesis, a process in which a sterile needle is inserted into the abdomen to remove large amounts of fluid — up to 15 liters at a time in some severe cases.

Device designers at Sequana Medical (formerly Novashunt) reasoned that if they could move fluid from the peritoneal cavity into the bladder by employing a battery-powered low-flow pump and a set of two catheters, they could eliminate the need for paracentesis, reduce much of the discomfort associated with ascites and help patients reclaim their mobility. With the implanted pump, fluid transferred to the bladder could be expelled during normal urination, so the patient’s quality of life would be greatly improved as well.

The task seemed simple enough: build on a pump prototype (origin ally conceived by a physician with years of experience in the treatment of ascites) and make a few improvements to ensure that performance and battery life expectations could be consistently met. However, it soon became apparent that the device motor would require an added level of protection against malfunction caused by the potential ingress of moisture, fibrins, large proteins, blood clots, and other organic materials.

With clinical trials for the newly developed Automated Low­Flow Ascites Pump, or ALFApump®, in its sights, Sequana Medical began looking for a solution that combined the required FDA USP Class VI compatibility with low friction and good sealing performance that would help maximize device performance inside the body. The company’s search led to several important design changes and, ultimately, to the use of a Bal Seal spring-energized rotary seal in the motor housing.

Starting at the Heart

Before they even considered a final sealing solution, engineers at Sequana Medical took a step back and examined their pump’s most crucial component — its motor.

Earlier designs employed a brushed DC motor, but tests had proven this was too susceptible to humidity, which could significantly impede or even prohibit pump performance. In addition, abrasions from the brushes could lead to particulate generation over time. In order to address these issues, designers incorporated a brushless DC motor that proved to be far more humidity­tolerant. 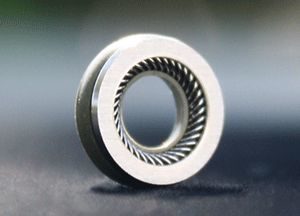 Even with this fundamental change, however, Sequana Medical knew it needed to be absolutely sure the motor could perform for extended periods in a critical implantable environment. And that meant finding the right seal. Together with its seal supplier, Bal Seal Engineering, Inc., Foothill Ranch, CA, the company began looking at sealing options and considering how a number of different factors (including hardware, operating conditions, performance requirements, and seal geometry) would affect seal performance.

“We knew from the start that we couldn’t overlook sealing,” said Thomas Degen, Sequana Medical’s Chief Technology Officer. “The risk of clogging the motor would be too great, and any fluid in the motor would result in a need for excessive charging or other negative consequences for the patient. So instead of trying to shoehorn an off-the-shelf solution into our application, we decided to team up (with Bal Seal) and take a very holistic approach to meeting the challenge.”

A Hard Look at Hardware

Initial designs for the ALFApump featured a relatively large shaft and a self-centering seal used to reduce the influence of misalignment between the gearbox and motor. However, this combination didn’t meet performance requirements, as it resulted in very high motor friction and power consumption (low battery life).

In the ensuing redesign, stainless steel shaft hardware material was selected. Although the material’s hardness (at 30 Re) could be considered low for dynamic sealing, it posed relatively low risk to wear.

The selected shaft allowed for the design of necessary lip contact stresses to seal and minimize the breakout, or “stiction,” to running friction ratio. This addressed ‘Previous concerns about high torque values and their potential drain on the device battery. Although very small, the diameter still allowed for the fabrication of a sealing component.

The housing size was set to a dimension that allowed the seal cross section to remain within an aspect ratio greater than 1:1. This size enabled engineers to optimize radial sealing lip deflection forces as they relate to material “hoop strength.”

The selected shaft surface was non -coated, with a plasma-polished finish of 0.2 pm Ra. Al l edges and lead angles were set to minimize the possibility of seal damage during installation, as any nicks or burrs could create a leak path to the motor.

Engineers from Sequana Medical and Bal Seal also carefully assessed the environmental conditions in which the seal would be operating, as well as its intended performance parameters. These factors included rotary speed, pressures from <10 psi to slight vacuum , a pressure/velocity value of –500, and temperature ranges of 25° to 50° C.

Since the application had specific biocompatibility requirements, seal material choices were limited. Ultimately, a specially processed pure medical grade ultra-high molecular weight polyethylene (UHMW) was chosen for its superior wear factor (a 4:1 ratio over PTFE in water) and resistance to degradation under gamma radiation. The inherently low friction properties and high wear resistance of the U HMW allowed engineers to design in more contact stress on the sealing lip for better performance und er  slight vacuum  or low pressures.

As stiction was identified as an important influence on pump power consumption, Sequana Medical looked to Bal Seal engineers for a seal geometry that could provide sealing in low pressures. The seal manufacturer created a custom solution that employed a Bal Seal Canted Coil Spring® energizing element and a metal locking ring to maximize the seal lip contact area. The press-fit locking ring, made from the same stainless steel material as the pump motor housing, minimized the thermal expansion rate of the material by encapsulating the outside diameter (OD) of the seal. It also prevented the seal from spinning, and allowed for minimal material on the inside lip diameter.

The seal’s OD configuration consisted of a “dual bump” contact area (in the design , both the metal locking ring and UHMW ring contacted the housing) which  provided excellent protection against leakage.

Despite the small envelope, the spring inside the seal jacket provided a 40 percent deflection, ensuring consistent wear and more reliable sealing performance.

As a result of this collaborative effort, Sequana Medical was able to achieve its desired performance. According to Degen, the addition of the spring-energized seal to the ALFApump design enabled his company to reduce device power consumption by 40 percent and increase battery life by 20 percent.

The ALFApump system was granted the CE mark in July 2011, and is currently being introduced into leading hepatology centers across Europe. In March of this yea r, the company announced it had obtained Germany’s Neue Untersuchungs und Behandlungsmethode (NUB) approval, which allows participating hospitals to receive reimbursement for innovative new products.